You will see “The Mother of all Rus’ cities” and walk along Volodymyrska Street, which gathered the bigger part of all Kyiv sights like pearls in the pearl-string. This is the chance to see the places of the first Kyiv princes as well as their creations; this is the memory of heathen times, the first stages of cultural development, customs and traditions of Kyiv inhabitants. This a route to the place which started all the Rus lands.
Duration: 2-3 hours

This is the chance to see all the corners of our country in miniature during one day, get acquainted with the culture and traditions, take part in folk events and simply to spend a nice day on the open air. Also you can have a horse-ride and launch a kite after the tour is over.
Duration: 3-5 hours.

Saint Sofia Cathedral is the grand construction of the times of Kyivan Rus, the monument that reminds the descendants of the Christian spirit grandeur. While visiting Sofia Cathedral one can touch the history of their ancestors.
In frames of Kyiv Saint Sofia Cathedral takes the leading place among all sights of architectural nature. Cathedral has more than one name: it is also called “Saint Sofia of Kyiv”, “Sofiivsky Cathedral”, “National reserve Sofia of Kyiv” and simply “Sofia museum. Whatever names we give to this cathedral it would remain to be the greatest monument to the Ancient Rus and Byzantine architecture. Today Sofia of Kyiv is famous for its interior, special and unique in beauty mosaics and numerous XI century frescos.
Duration: 1 hour

“Out of flames and into the water” – these words can describe the district, which saw so many tragedies: it was burnt by fires, drowned by the Dnieper floods, ruined by the hostile tribes. Today Podil is one of the most prestigious districts in Kyiv and it offers to get acquainted with its history and democratic spirit.
Duration: 4 hours.

all kyiv in 3 hours

The National Museum of the History of Ukraine in World War II was ceremonially opened on May 9, 1981. The construction was done according to the draft project of the famous sculpture E. Vuchetych and the architect E. Stamo. The memorial complex covers the area of 10 hectares (approximately 24.7 acres) on the hill, overlooking the Dnieper River. It contains the Motherland monument, giant bowl "The Flame of Glory", a site with World War II military equipment, and the "Alley of the Hero Cities". One of the museums also displays the armaments used by the Soviet army post World War II. The sculptures in the alley depict the courageous defence of the Soviet border from the 1941 German invasion, terrors of the Nazi occupation, partisan struggle, devoted work on the home front, and the 1943 Battle of the Dnieper.
Duration: 2-3 hours.

Museum has a great collection of army technology.
The source of constant acquisition of museum’s exhibit items are airfields with aircrafts that are taken out of service and are the historical witnesses of Ukrainian aviation development. These planes were brought to good exhibit condition by the plants of Ukrainian aviation industry and after that have taken their place at the exhibition.
There are more than 70 planes and helicopters. There are also rockets, weapons and engines on the display.
Duration: 2 hours

Visit to memorial “Babyn Yar”. In the XXth century this place twice was the center of terrible tragedies. Its name is engraved in the history of the World War II just as Buchenwald, Majdanek and Treblinka. There were attempts to hide the truth about Babyn Yar first by the Nazi, then by the Soviet archivists who changed the war history to be more heroic. Babi Yar was also the site of a large mudslide in the spring of 1961, which buried between 1,500 and 2,000 people and the remainders of the previous tragedy.
Duration: 2 hours.

One of the most ancient streets of Kyiv, Andriyivskyy Descent, twines between ancient hills running down from the heights of old Podil. In the end of the last century the street was being built up anew. The new houses were placed in harmony, so the street became cozy and beautiful. In every house lived either a merchant or a crafter so the trade was carried out in that very street.
The main decoration of this street up to now remains to be Saint Andrew’s church built in XVIII century by B. Rastrelli and a romantic castle-house towering over the picturesque Uzdykhalnytsia mountain. At the foot of the mountain Kyiv architect I.I. Gordenin built the House No13 a hundred years ago. The family of professor of Kyiv seminary, Afanasii Bulgakov, settled in this house in 1906.
Duration: 1 hour

Khreshchatyk is the main street of Kiev, Ukraine. The street has a length of 1.2 km. The name of Khreshchatyk is believed to be derived from the Slavic word krest or khrest (cross). It lies in a valley that is crossed by several ravines. When looked at from above, the valley resembles a cross. In the documents of the XVII century this place was called Khreshchata Valley. The street was built in the beginning of the XIX century. In previous years Khreshchatyk was the location along the Dnieper river where Volodymyr the Great baptized his family (now there is Naberezhno-Khreshchatyzka Street running down there). There is also a version that a small river, the Khreshchatyk River, the Dieper’s feeder, a tributary of Kiev's Lybid River, ran along much of the valley.
Duration: 1 hour.

It was founded in 1874 after the project of the gardener О.G. Niedzelsky. The first excellent place for a stroll is Mariyinsky Park. Kyiv inhabitants love walking in this park. When you cross it you will see Mariyinsky Palace, the one on the background of which some of the Presidents of Ukraine wished their fellow citizen happy New Year. If you turn left you will see the dome of the Supreme Council (Verkhovna Rada) of Ukraine. From the viewpoint at a steeper you will have a breath-taking view of the Dnieper and Left Bank of the river. Near Verkhovna Rada building there is a half round building – the Cabinet of Ministers of Ukraine.
Duration: 2 hours.

Kyiv in Miniature is a park of miniatures, situated in Kiev in the area of Hydropark. There are exposed models of Kiev architectural sightseeings, in the scale of 1:33. The park's area is 1.8 hectares. It was opened on 23 June 2006. The closest metro station to it is Hydropark. You can see all sights of Kyiv in just 30-45 minutes and learn more about their history. At the present time There are 48 miniatures in the park, including Independence Square and Khreschatyk, Kiev Pechersk Lavra, St. Michael's Golden-Domed Monastery, Golden Gates, Saint Sophia Cathedral, Mother Motherland Monument and others.
Duration: 30-45 minutes 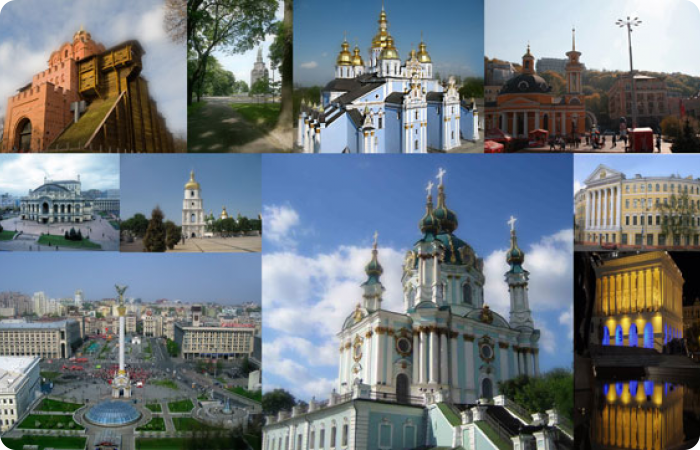 КYIV CENTER FOR TRAININGS AND TRANSLATIONS ТАТ СENTER: ALL THAT YOU NEED
More